Despite what appears to be an ever-decreasing number of live venues in Cardiff, bands continue to form and great music refuses to go quietly into that dark night. Black Elvis is one band that, reassuringly, is heading into the rock n roll limelight. We caught up with lead singer Levi Tyrell Johnson. 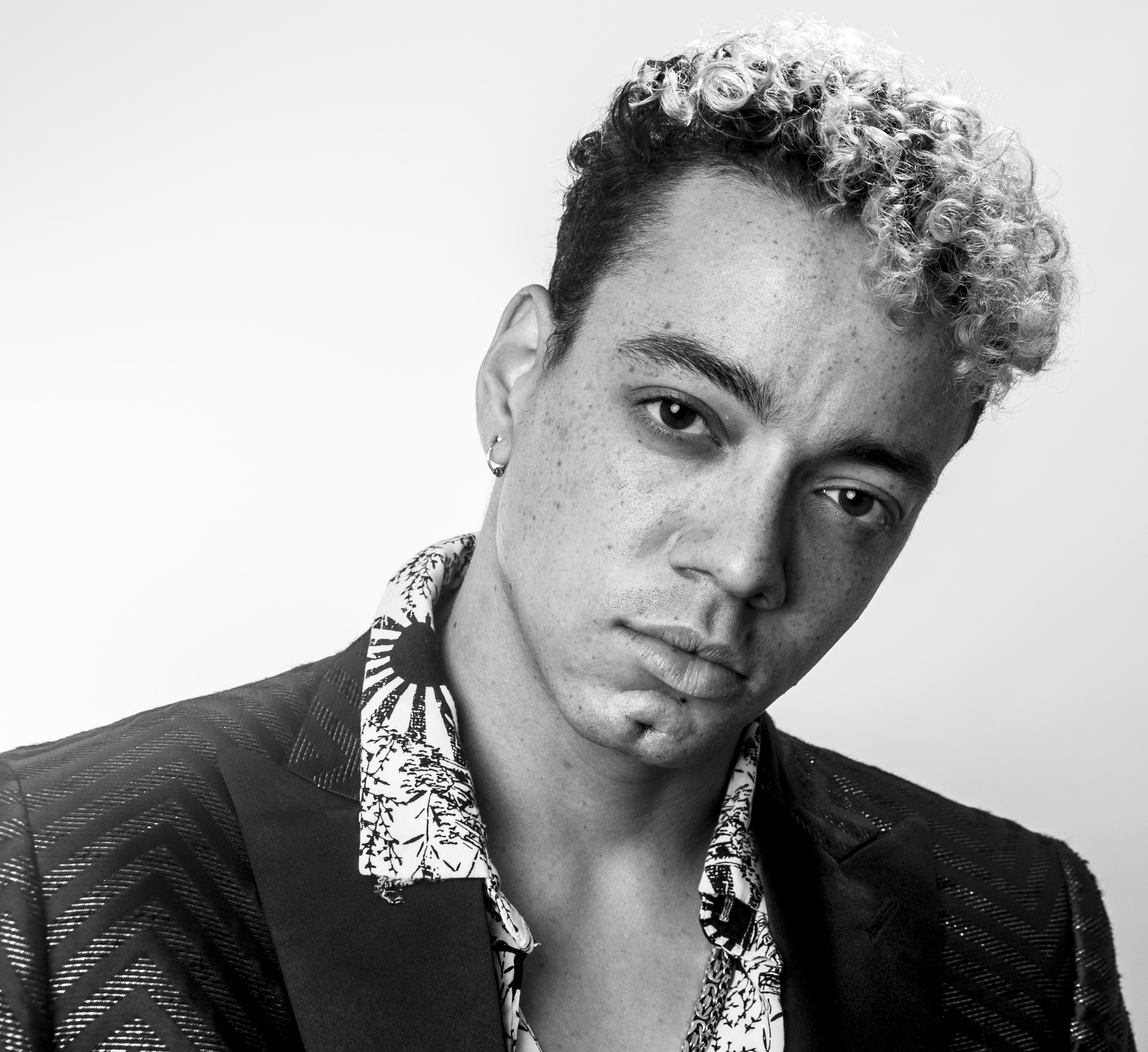 Black Elvis is quite a name! How did you come up with that and what is the Presley connection?
Well the name came quite organically. After weeks of trying to think of something with the band, I awoke one morning looked in the mirror and my hair was mightily “quiffed” and I thought to myself “Wow I look like a Black Elvis!” Which instantly stood out to myself. I ran it by the band and we all instantly fell in love with the name. As for connection to The King, we are trying to create a new type of Rock n Roll and hopefully reintroduce it to the younger generations as well as paying homage to the generations before us. 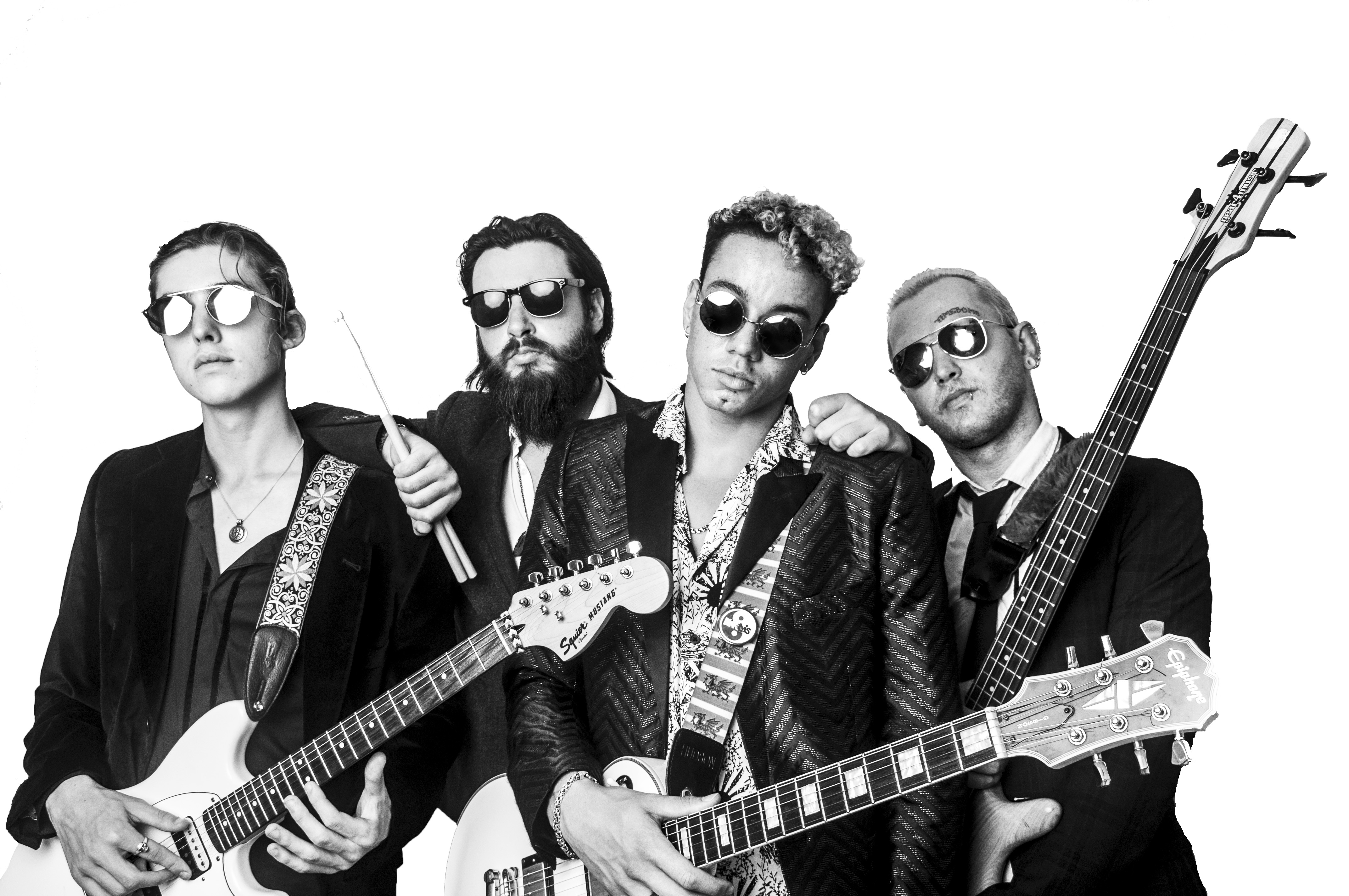 The band members are quite diverse in their musical backgrounds. How did you all come together?
Mostly through mutual friends. Being in a mega Rock-band was always my biggest dream. I’d been trying to assemble a band through my whole music career but never managed to find the perfect players. I reached out to local musicians and one of the first people to reach back was this crazy looking punk named Andy. It was love at first sight! Together we then scoured the rest of Cardiff in search of the dopest musicians in town where we then stumbled onto a teenage prodigy blues guitar hero and an experienced metal head drummer. Our styles instantly blended into sweet harmony. 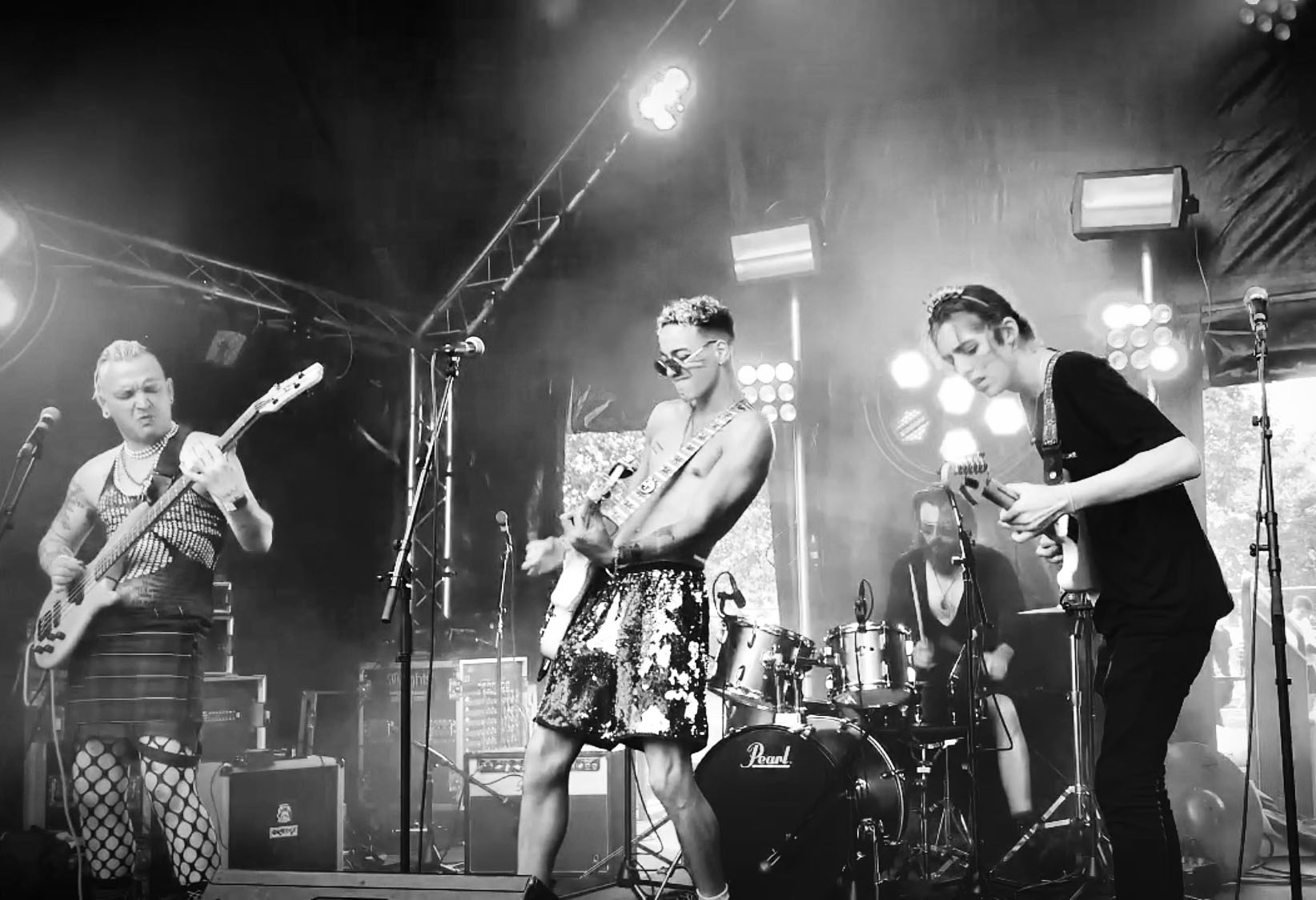 You’ve come a long way in just a few months and things seem to be happening very fast. How has all that happened?
Tenacity and relentlessness. Before gigging we went through weeks of intense rehearsals to make sure that we could all play together naturally and confidently. We went into our first gig with no expectations but the reaction and praise we received was unfathomable. This then gave us the confidence for the ensuing live shows where the crowds and response was just getting bigger with each show we played. We are all so passionate about the music we play and create and I feel that that is evident in our performances which keeps people coming to the shows. We’ve also received a huge amount of support from close friends who have been helping with design and photos etc making our online presence more effective. We’ve also had a huge amount of support from Newsoundwales who has been integral to our rapid progression. 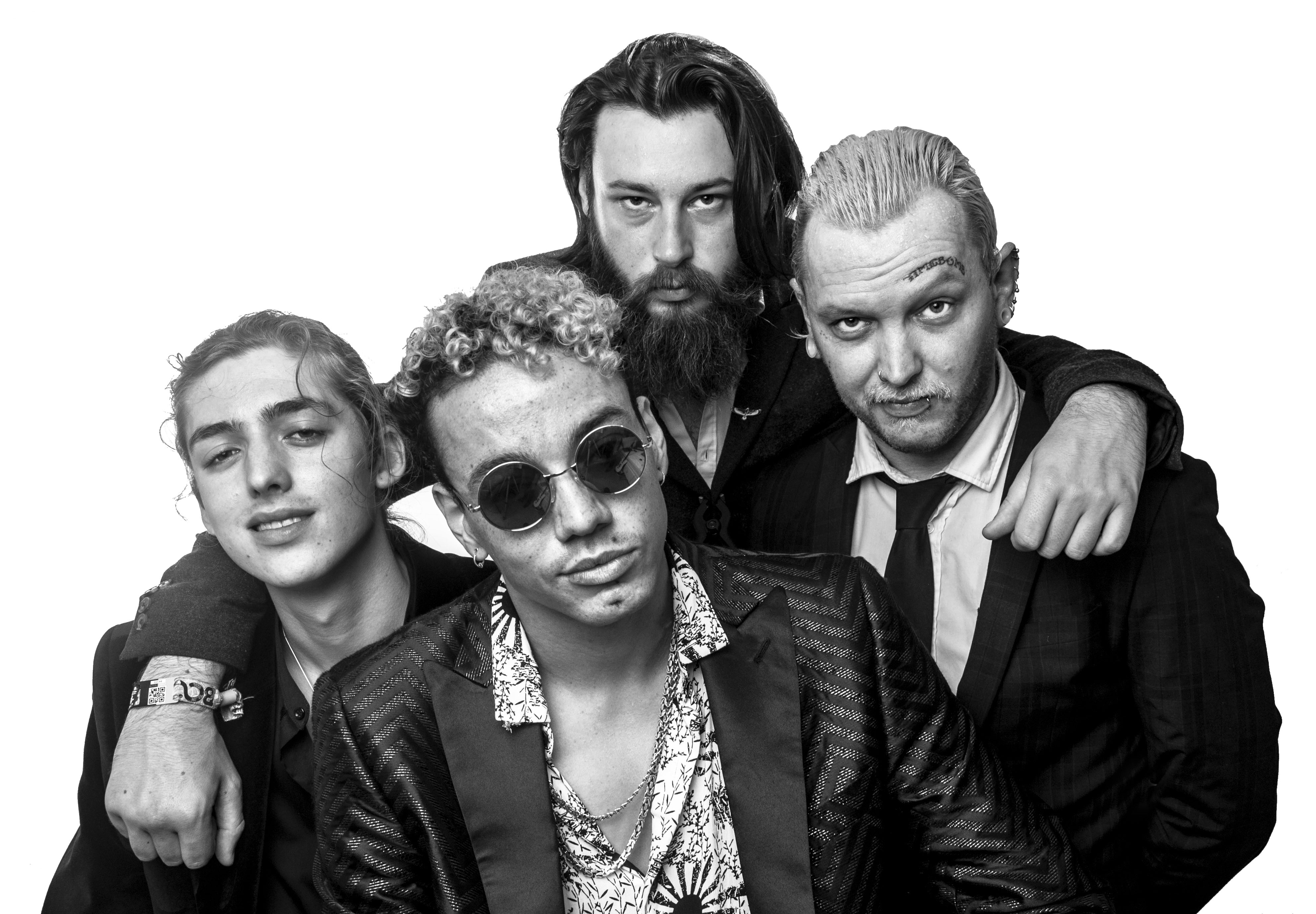 Your new ep “See Love” has just been released. Tell us about how it came about and what is the meaning behind the title?
I felt it was important to begin our career as a band on a positive. My goal is and always will be to inspire goodness in people and I fell that the EP name should reflect that. “See Love” comes from the line “Don’t See Drama, See Love” from one of the songs from the album. My uncle Noah Francis Johnson has been my biggest inspiration through life and this phrase is one of his proverbs. People can be bad and bad things can happen at any time. The only way we can forgive and move forward as people and as a Race is with love. Everything else is irrelevant.

The ep was recorded at Woodbine Studios with John Rivers who has worked with bands like The Specials. How the experience and what was it like working with John?
We were all mega excited with ultimately high expectations going to work with John and we were amazed and grateful to work with someone who has worked with such great names. I personally had my best studio experience yet working with John and after hearing the tracks back after recording, he exceeded every expectation we had. The man’s a true master of his craft and we as a band look forward to working with him again down the line.

How will you be promoting the ep?
Every way possible. We’ll be getting as much coverage as possible through magazine, TV and social media but mostly we’ll be gigging as much as possible as that’s where the true magic lies.

Black Elvis have already gained a reputation as a formidable live band. How would you describe a Black Elvis gig to the Uninitiated?
A Spectacle to Behold! There are many elements to the live shows but, in short, I’d say we’re high energy and emotion. It’s also a bit of a musical journey through genre’s full of passion and Soul. I feel we play and perform our music boundlessly with complete musical freedom which bring people from all backgrounds together.

What is the best thing about being part of Black Elvis?
Apart from the incredible shows and the high praise from other respected musicians and our fans, the best part about being part of Black Elvis has got to be the relationships we have made with each other. We all have so much love and appreciation for each other and of course we clash at times but the unconditional love we have for one another is truly beautiful. We all feel closer than family and I think we are all grateful for that most of all.

Your family is quite musical so can you tell us about how they have influenced your career.
My grandfather Frankie Johnson was a local legend and was always an early role model. He sadly died of Alzheimers before he could pass his wisdom onto me. My uncle Noah Francis Johnson has always been in showbiz and watching him growing up do nothing other than what he loves always gave me the inspiration to step into stardom. Over the past few years especially he has been somewhat of a mentor making sure I was the best song writer and performer I can be.

My father Tony Johnson is an animator and although he has had many previous successes, he’s been working on numerous cartoons over the years. His dedication to his projects has taught me to focus on what I love and believe in rather than what can make me a bit of cash. I also have a rapper brother and multiple rapper cousins. 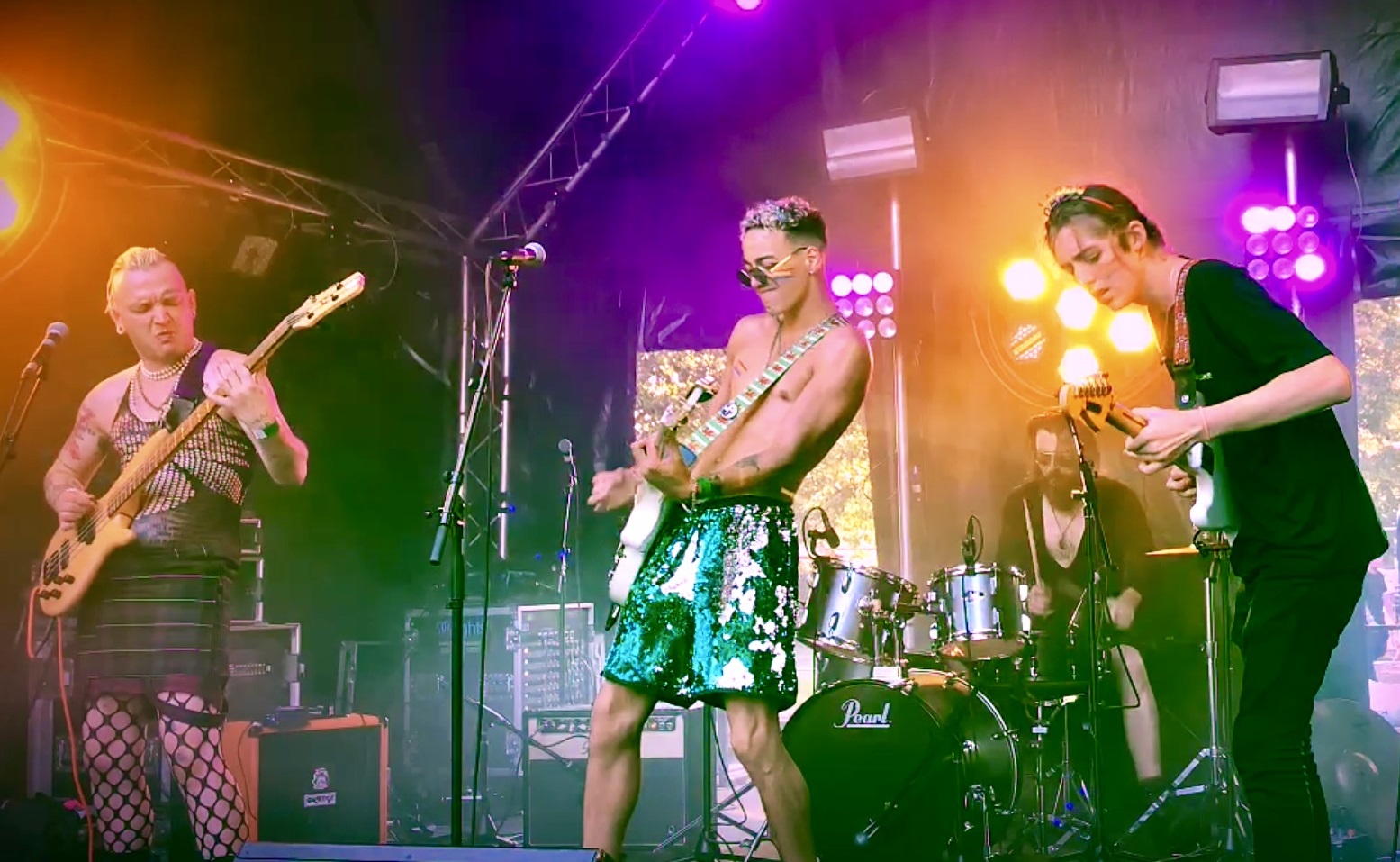 What plans does the band have for the year ahead?
Well up until now we’ve been gigging around Cardiff and local areas. This year I hope to take our music and message of love to the rest of the world making the most of every opportunity and hopefully inspiring some along the way!

Special thanks to Francis Brown of NewSoundWales.com and Gwyn Williams for the images.
…